In the war between good and evil, sometimes the biggest battles take place inside the soul…and the heart.

From New York Times and USA Today bestselling author Larissa Ione, comes CIPHER, a passionate and spellbinding novella from the Demonica Underworld Series, brought to you by 1,001 Dark Nights! Grab your copy today! 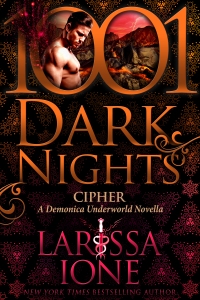 It’s been seven months since Cipher, an Unfallen angel who straddled a razor thin line between good and evil, woke up in hell with a new set of wings, a wicked pair of fangs, and a handler who’s as beautiful as she is dangerous. As a laid-back cyber-specialist who once assisted guardian angels, he’d been in a prime position to earn back his halo. But now, as a True Fallen forced to use his talents for malevolence, he must fight not only his captors and his sexy handler, but the growing corruption inside him…before the friends searching for him become his enemies and he becomes his own worst nightmare.

Lyre is a fallen angel with a heart full of hate. When she’s assigned to ensure that Cipher carries out their boss’s orders, she sees an opportunity to take revenge on those who wronged her. All she has to do is appeal to Cipher’s burgeoning dark side. But the devastatingly handsome fellow True Fallen has other ideas — sexy ideas that threaten to derail all Lyre’s plans and put them in the path of an approaching hell storm.

Danger and desire explode, even as Cipher and Lyre unravel a sinister plot that will fracture the underworld and send shockwaves into Heaven itself…

**Every 1001 Dark Nights novella is a standalone story. For new readers, it’s an introduction to an author’s world. And for fans, it’s a bonus book in the author’s series. We hope you’ll enjoy each one as much as we do.**

I’ve never read a 1001 Dark Nights novel that I didn’t enjoy and I’m pleased to tell you that the trend continues.

My enjoyment of this story was enhanced by the fact that I have now read some more of the preceding stories, so I have more of a handle on the wider Azagoth story arc, as well as some of the supporting characters who make an appearance here.

And I’m not going to lie, what happens to Cipher is a bit twisted, whilst at the same time being completely and utterly right for the story.  These two together are fab, and the entire tale is just another darkly delicious morsel.

Lilliana inhaled a shaky breath as she stood on the portal pad inside Sheoul-gra, the symbols engraved into the stone glowing hotly. A breeze swirled around her, rattling the leaves on the perpetually blooming citrus trees and bringing their tangy and sweet scents to her nose. Grassy lawns stretched for acres, broken by babbling streams and worn paths — and the occasional ancient Greek column or demonic statue that rose into the featureless gray sky.

Several yards away, a fountain that once ran with blood splashed crystal water onto pavers leading to outbuildings that housed dozens of Unfallen angels and Memitim. And beyond the fountain, Azagoth’s palace towered over all, its pale walls gleaming.

Relief sifted through her, temporarily replacing her nervousness. The realm was attuned to Azagoth’s moods, and she wasn’t sure what she’d have done if she’d come back to find the kind of decay and evil that had once held court here.

The Grim Reaper’s realm could be beautiful but disconcerting; look, but not too closely, touch, but don’t feel.

Her gut turned over, and inside her rounded belly, the baby stirred as if sensing the return of her anxiety.

Except that anxiety was too mellow a word for what she was experiencing. Really, she was flat-out terrified, mere moments away from seeing her husband for the first time in months. For the first time since she’d left him.

And he didn’t have a clue that she was pregnant.

She almost regretted telling Reaver that she didn’t need him to accompany her down here when he’d flashed her from Ares’s Greek island to the outer portal. She should have at least allowed Maleficent, a hellhound that had shadowed her everywhere on the island, to come with her. The hound had refused to leave her side until Cara distracted the beast long enough for Lilliana to get away. She was going to miss the moose-sized canine, but Cara assured her that Mal would find her if the hellhound had bonded with her.

Lilliana was going to have a hard enough time trying to explain bringing home a baby, let alone a pet that ate people.

Resting her palm on her baby bump, she stepped off the landing pad and started toward the palace, her heart pounding wildly. Azagoth would have sensed her presence by now.

Before that thought even faded, the skin on the back of her neck tingled, and she stopped in her tracks.

He was behind her.

She should turn around and face him. But damn, she wasn’t ready for this.

Closing her eyes, she let out a long, ragged breath, and when she spoke, she could only manage a whisper. “Azagoth.”

Larissa Ione is a New York Times and USA Today bestselling author. An Air Force veteran, she traded in a career as a meteorologist to pursue her passion of writing. She now spends her days in pajamas with her computer, strong coffee, and supernatural worlds. She believes in celebrating everything, and would never be caught without a bottle of Champagne chilling in the fridge…just in case. She currently lives in Wisconsin with her U.S. Coast Guard husband, her teenage son, a rescue cat named Vegas, and her very own hellhound, a King Shepherd named Hexe.