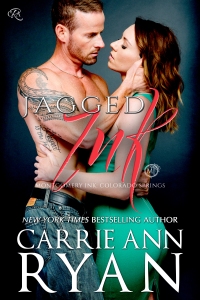 The Montgomery Ink: Colorado Springs series continues with a couple fighting to keep what they thought they had and gain what they didn’t know they needed.

Roxie Montgomery met her soul mate when she least expected it. When he asked her to marry him, she thought her happily ever after was only just beginning. Then, she found that walking into the sunset was much harder than her favorite books made it out to be. After a crushing loss, she feels as though she doesn’t know her husband anymore, or rather…she doesn’t know herself.

Carter Marshall has loved Roxie since the first time he saw her. But as the days pass between them, so does the distance. He doesn’t know how to show her that he’s all in, and honestly doesn’t know if she’s in at all. When an accident changes everything, they’ll have to decide if what they have can be salvaged, or if starting over is the answer. Or even possible.

Without fighting, without a true new beginning, sometimes, the remnants of what was lost can leave anyone jagged, shells of what they were before. It will take more than the idea of forever for Roxie and Carter to find themselves again, but as the Montgomerys know, nothing worth fighting for is easy.

Wow. The first part of this tale is not an easy read. There is a lack of hope and overwhelming sadness that just permeates the whole story. And the repetition of the respective positions just serves to underscore that feeling. And although frustrating, Ms Ryan kept this on just the right side of exasperation.

This is a story that has been hinted at in other books. And you will probably work out what the cause of their problems was. But that doesn’t detract from the emotion layered within the pages.

Carrie Ann Ryan is the New York Times and USA Today bestselling author of contemporary and paranormal romance. Her works include the Montgomery Ink, Redwood Pack, Talon Pack, and Gallagher Brothers series, which have sold over 2.0 million books worldwide. She started writing while in graduate school for her advanced degree in chemistry and hasn’t stopped since. Carrie Ann has written over fifty novels and novellas with more in the works. When she’s not writing about bearded tattooed men or alpha wolves that need to find their mates, she’s reading as much as she can and exploring the world of baking and gourmet cooking.