Review – Dark Lands: War of the Sentinels by Lyn I Kelly 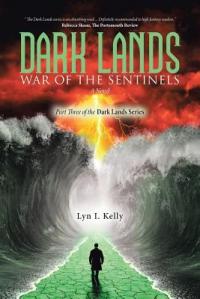 Welcome to the Dark Lands…again.

In one explosive instant Sundown Thompson has found herself lost in the Dark Lands past, a world with which she is both familiar and estranged. The Willkeeper has no record of her. The Glorian Council does not recognize her. And the names Webb, Raven, Caleb, and Just Jake mean nothing to those around her.

In the third book of Lyn I. Kelly’s Dark Lands series Sundown must tenuously navigate between a future she knows all too well and a past not prepared for what is coming. All the while an unrestrained evil known as Hekla, born during the living world’s creation, marches across the centuries intent on entering the Dark Lands and claiming what he perceives as his birthright.

With horrors from Sundown’s future finding their way across time, she and her new allies, some familiar, some new, must stop these nightmarish intercessions before the past and future collide and the Dark Lands is irreparably marred.

I’ve said it before, I’ll say it again – time travel makes my head hurt.  This action filled, penultimate volume in the series is no exception.

There is a lot going on in this book, and whilst the previous volumes have been very character driven, this feels almost like a colouring in of their backgrounds.  That is not to say that it isn’t still an engaging book – far from it.

The sheer amount of detail being provided, coupled with an explosive ending, make this a fast paced, expansive addition to the world created by the author.

I’m looking forward to seeing what the concluding chapter brings.

Lyn I. Kelly is a graduate of the University of Texas in Austin. Writing since the age of eleven, he has been published in Diamond Comics, Newsweek and more. When he’s not writing or spending time with his wife and four children, he is also a marathoner. Kelly resides in Keller, Texas. Dark Lands: Requiem is his first novel.