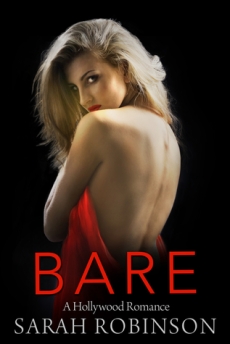 Following the popular series debut—NUDES was praised as “passionate, emotional and uplifting” by #1 New York Times Bestselling Author Lauren Blakely—contemporary romance author Sarah Robinson weaves a new standalone story where a second chance at romance is found on a Hollywood film set and secrets always have a way of being…exposed.

Reed Scott is the hottest actor in LA…
Being a Hollywood heartthrob has its perks, and I’ve damn sure enjoyed every one of them, both on and off the silver screen. The tabloids loved every second of exploiting my privacy, chronicling my mistakes in ink for the whole world to see. Accepting the lead role in a romantic dance film was guaranteed to make me a box office hit and help me rewrite my image, until the choreographer hired to train me turned out to be the only woman I’d ever loved and lost.

As beautiful and enticing as ever, Teagan walks in and reminds me of the worst mistake I’ve ever made. She should hate me, and now she has the power to destroy everything I am.

Teagan Reynolds is picking up the pieces…
Fool me once, shame on you. Fool me twice…never going to happen. I fell in love with Reed Scott once and it nearly killed me—literally. The last thing I want to do now is teach him how to dance, but I need this job and there’s no way I’m letting him take yet another thing away from me.

Reed is in my world now, and this time we’re dancing by my rules.

I loved Nudes.  It was such an unexpectedly lovely book.  But of course, that meant that this book had some big book-shaped shoes to fill.

Fortunately, this is another well written, character driven story from Ms Robinson.

Do you know what I enjoyed the most about this? It’s that the thing that comes between them is them.  Not external forces.  Not cheating.  Not forced misunderstandings which have been shoe-horned in as a narrative device.

Nope.  Them.  Their history.

This was an easy book to read.  The emotional connection between these two was palpable – it was impossible not to root for them to overcome their issues.

Aside from being a Top 10 Barnes & Noble and Amazon Bestseller, Sarah Robinson is a native of the Washington, DC area and has both her Bachelors and Masters Degrees in criminal psychology. She is married to a wonderful man who is just as much of an animal rescue enthusiasts as she is. Together, they own a zoo of rescues including everything from mammals to reptiles to marsupials, as well as volunteering and fostering for multiple animal shelters.