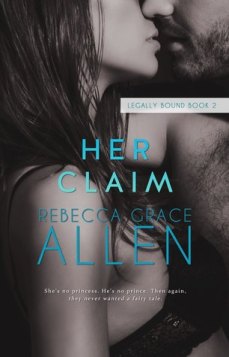 Cassie Allbright takes no prisoners. A half Cuban ball-busting attorney, she’s too tough to admit what she wants in bed. But tough is the only way to cut it in her high-powered firm, and Cassie doesn’t need a knight in shining armor. And she definitely doesn’t need Patrick Dunham—an arrogant, chauvinistic man-whore with a knack for pissing her off.

Bound to the helm of his family’s publishing house, Patrick is shackled to a life of power and wealth he never wanted. Seduction is his only distraction—his nights of pleasure always temporary, because happily-ever-afters are not for him. But while luring a woman into his bed has always come easy, the high-and-mighty Cassie has never succumbed to his charms.

Their verbal sparring turns to foreplay, but instead of scratching an itch, it only whets their appetites. Patrick gives Cassie a taste of what she’s secretly craved, and Cassie’s dark desires stir up things Patrick never knew he wanted. Enchanted, he offers to fulfill her most dangerous fantasies. She agrees, with an iron-clad escape clause: her heart is off-limits, and so is his.

Funny thing about hearts, though. They have a way of ignoring the fine print.

Warning: This book isn’t for the faint of heart. Disclosure includes angry, vying-for-control hate sex and one steamy weekend in Miami. Ready? Break the caution tape and proceed.

This book is a lot of fun. Not funny ha ha, but rather, because of the direct, yet suprisingly tender manner of delivery of this story.

Now, it is most definitely adult in content. And although there is a necessarily explicit telling of the relationship, it didn’t feel gratuitous. Rather, it was key to understanding the dynamic between these two.

I really enjoyed this book. Delivered with just the right tone, this just worked.

Rebecca Grace allen holds a Bachelor of Arts in English with a double concentration in Creative Writing and Literary Comparison as well as of Master of Science degree in Elementary Education, both of which seemed like good ideas at the time. After stumbling through careers in entertainment, publishing, law and teaching, she’s returned to her first love: writing. A self-admitted caffeine addict & gym rat, she currently lives in upstate New York with her husband, two parakeets, and a cat with a very unusual foot fetish.