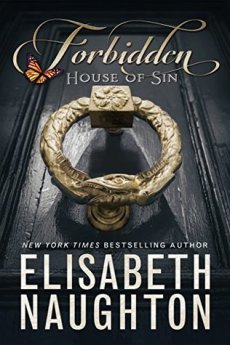 From New York Times Bestselling and RITA Award-winning author Elisabeth Naughton, the first book in the House of Sin Series.

He is temptation. Forbidden fruit. A craving I can’t seem to resist.

I went after him in search of answers, certain he had blood on his hands. Now I’ve fallen prey to his seductive looks and commanding charisma.

I know he is a threat. He’s entwined in a dangerous world I don’t understand. But even that doesn’t stop me from aching for his touch, for the taste of his wicked lips.

Before I can truly surrender to the fire smoldering between us, I need to know more. I have to see behind the doors he keeps firmly locked.

**WARNING!**
This book is very sexy, very dark, and very addictive! Features a mysterious hero with a dangerous secret. This is a big story that can’t be told in only one book so there is a cliffhanger – but never fear, book two releases three weeks later. The release schedule is as follows:

Oh my. I’m going to apologise in advance for this review, because I’m genuinely not sure that I can write something that does justice to this book.

There are so many things about this story that just work; that just coalesce in an apparently effortless manner to produce a completely and utterly gripping story. One that I only reluctantly put aside for such trivial annoyances such as the day job.

I suspect that this book will stay with me for a while. This couple’s relationship is firmly imprinted in my brain.

I have no idea what will be revealed in the next installment. But I’m sure that it will be dark, tense and entirely delicious. Just like this one was.

Before topping multiple bestseller lists—including those of the New York Times, USA Today, and the Wall Street Journal—award winning author Elisabeth Naughton taught middle school science. A voracious reader, she soon discovered she had a knack for creating stories with a chemistry of their own. The spark turned into a flame, and Elisabeth now writes full-time.

Though primarily known for her romantic suspense work, Elisabeth has penned over thirty books and continues to write in multiple genres, including paranormal romance and contemporary romance. Her books have been translated into numerous languages and have earned several award nominations, including three prestigious RITA® nominations from Romance Writers of America. In 2017, REPRESSED, the first book in her Deadly Secrets series, won the RITA® for best romantic suspense.

Elisabeth’s work has been praised by the Chicago Tribune as being filled with “deadly intrigue, high adrenaline action, and scorchingly hot passion.” Kirkus calls her “a writer talented enough at weaving a yarn to get her readers ensnared in it.” When not dreaming up new stories, Elisabeth can be found spending time with her husband and three children in their western Oregon home, wrangling two cats, or chasing after one very rambunctious Dalmatian.

Learn more about Elisabeth and her books at www.ElisabethNaughton.com.