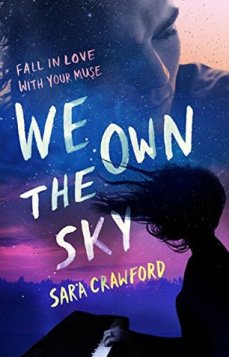 What could you create if you fell in love with a Muse?

16-year-old musician, Sylvia Baker, has always been different. She’s the only one who can see the “flickering people.” When she sees a gorgeous flickering man named Vincent, she learns that they are Muses.

With his help, she finds herself creating exquisite songs that she loves almost as much as songs by her favorite bands–Radiohead, M83, and The Black Keys–and she is falling in love in a way she never knew was possible. While trying to maintain her newfound friendships and her band, she falls deeper into the world of the Muses.

When the original Greek Muses wake to find a world in which the internet has given everyone the tools to be an artist, a battle between traditional and new methods of creation ensues. As Sylvia discovers how she is connected to the world of the Muses, she learns that this war may put her music, her love, her very life at stake.

This story weighs in at over 500 pages, yet in a lot of ways, due to the pacing and the skill of the storyteller, it feels like a much shorter read.

There is, to my mind, a strangely detached narrative style to this book which works well in the context of the overall story, particularly in relation to the final chapters.  The characters are well defined and the changing point of view helps to drive the tale forwards.

A well observed teen drama, intertwined with the myth of the muses to give a fantasy spin.  I look forward to seeing how the story unfolds in the next volume.

Sara Crawford is an author, a playwright, and a musician. Ever since she was five years old, she has lived for art in one form or another. This manifested itself as writing plays at age eight and convincing (forcing) the neighborhood kids to perform them on her driveway, auditioning for Atlanta Ballet’s The Nutcracker three years in a row before finally landing a small role as a toy soldier, starting an all-girl band in high school, writing and producing her own plays and short films, and most recently, writing a book about a girl who falls in love with her Muse (We Own the Sky). Sara has been an actress, a singer, a playwright, a songwriter, a guitarist, a keyboard player, a poet, a screenwriter, and an author of both fiction and non-fiction.

She graduated in 2008 from Kennesaw State University with a B.A. in English and in 2012 from the University of New Orleans with an M.F.A. in Creative Writing (emphasis in Playwriting). Currently, in addition to working as a freelance writer and internet marketer, she is also a creative writing professor in the graduate program at Southern New Hampshire University, teaching online classes. She also loves to talk about books, music, and writing on her YouTube channel.