For as long as she can remember, Seraphina Cross has experienced these visions that made her feel like there was more to life. It wasn’t until one moment, one accident that her life changed forever.

She awakens the next day a new person in more ways than one. With no recollection of past night’s events, she’s forced to adapt to certain sensations she is experiencing all while trying to piece together what exactly happened to her that fateful night. Her strange, hectic life doesn’t seem to make sense until she meets a handsome stranger. Only then does the puzzle finally piece itself together.

What she doesn’t expect is the new powers she has developed attracting all kinds of unwanted attention. Thrown into a world she never truly believed existed she is forced to come to grips with who she is becoming while staying out of trouble long enough to figure out what needs to be done to fulfill her destiny.

There is something about a present tense narrative which I find less … comfortable as a reader.  That said, the underlying plot for this book is a great premise.

I confess to finding the story a little confusing at times, and the incremental reveal of information was frustrating, and added to my lack of clarity at times.  However, this is an intriguing first volume of the story.  I look forward to reading more. 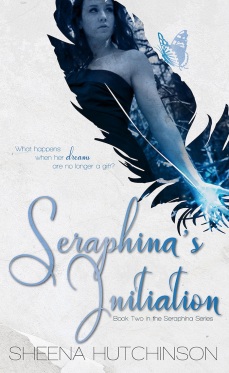 Seraphina Cross is unexpectedly thrown into this crazy, spiritual world of Angels versus Demons.

Never did she expect to meet Nate who was just a figment of her imagination. Now she finds herself moving in with him because of her innate responsibility to protect her loved ones from harm.

Finally beginning to feel at home in her new house and with her new relationship. Nate begins training Sera in all that she can do, surprising even himself at times.Just when she is starting to feel safe and powerful, Lucifer finds a new way to attack her at her most vulnerable.

When her dreams are no longer a gift, can Sera control the powers needed to defeat what’s coming before Lucifer fulfills his promise to her?

Sequels – they’re tricky things.  Especially when book 1 shows such promise for a series.  For the most part, I think that the author pulls it off.

That’s not to say that the use of present tense narrative sits more comfortably with me for this book – it doesn’t, particularly given that its use is not 100% consistent.  However, the plot growth is good and multi-faceted, and the characters continue to be described with depth.

Throw in the tentative and tantalising relationship with Nate, and you have a sequel which definitely kept my interest in the series.

I am intrigued to see where the author goes next.

One year ago, Seraphina’s entire world seemed to have dived into a mythical land over night. She’s somehow even gotten used to the madness of it all. But what happens when the craziness stops? Things become quiet… too quiet.

She should have known better, Sera should have known that things weren’t as quiet as they seemed. After one of the best nights of her life, Sera is forced into this treacherous journey to save one of her loved ones.

But following the path of evil begins to take its toll on Sera. As she struggles with her own internal dilemmas, Nate starts to take matters into his own hands. When this unseen world finally begins to affect Sera’s emotions and her relationship. Can she hold it together to save her loved ones? Will love conquer all? Or will it turn her evil… forever?

Hmmm. OK.  So this book didn’t go the route I was expecting – at all.  And in a lot of ways, that made the story more interesting – more compelling.

There is, however, a caveat to that.  There were parts of this which felt a little laboured, perhaps over done.  Whilst intellectually, I understand what the author was trying to do in charting Sera’s “journey”, it did make this book a little slower going in parts than its predecessors.

Additionally, Sera did, at times, behave in such a childish manner that it was really at odds with the character I thought I knew from the previous books.

That said, this wasn’t a badly crafted book at all.  I was perhaps just hoping for something different.

Sheena is a born and raised New Yorker, who followed her happily ever after to a much more rural town in Maine. When she’s not driving an hour to find a Starbucks or running from bugs that are way to big for her taste, she’s focusing on writing stories that empower and inspire.

Sheena always roots for the underdog, believes in love at first sight, and that everyone should have their happily ever after. For more on Sheena and her books visit her website: www.SheenaHutchinson.com.