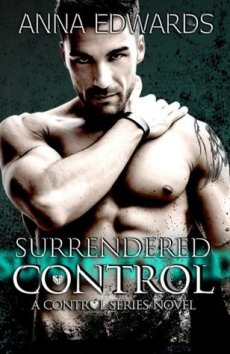 Debonair businessman James North is running from his past. He refuses to face it, preferring to hide behind his rigid control. But when he meets a blonde haired beauty the volcanic eruptions of passion between them show him that life isn’t the black and white he was lead to believe.

Surrendered control is the debut novel of the author Anna Edwards. It tells of the fledgeling love between James and Amy and how their pasts twist and turn to tear them apart. The novel is set in London, but through business travels, it is given an international feel based on the author’s personal life.

Are you ready to step inside the world of Control?

I really don’t enjoy writing reviews such as the one which is to follow.  Particularly when it relates to a debut novel.  What I will say, is that looking at the reviews, I am very much a minority voice, so if the synopsis intrigues you, I encourage you to read the book and come to your own decision.

There might have been the kernel of a decent story here.  Unfortunately, for me, the execution was sub optimal.

As the reader, I never really felt the connection between the two main characters, nor did could I really believe the correlation between the trauma in James’ past and the way it affected him.

That aside, I found that even the basic conversations between the two felt stilted and unnatural due to the lack of any contractions or everyday language usage.

Added to that, I’m afraid that the final trauma/conflict didn’t make me feel that there was any threat to the safety of the main characters.

This book simply didn’t work for me on many levels.

Ok, this is the bit where I have to sell myself. Why is it so much easier to write about sexy blokes! Anyway.

I am a British author, from the depths of the rural countryside near London. In a previous life, I was an Accountant from the age of twenty-one. I still do that on occasions, but most of my life is now spent intermingling writing while looking after my husband, two children and two cats (probably in the inverse order to the one listed!). When I have some spare time I can also be found writing poetry, baking cakes (and eating them), or behind a camera snapping like a mad paparazzi.

In 2015 I was diagnosed with depression and anxiety. It was also around this time that I became one of the founding members of a dramatic/erotic/dark roleplaying group on Twitter. It was wildly popular with both English and American followers. The writing helped me to overcome my depression by giving me an outlet to channel my thoughts into and not sit around worrying all day about things that would never happen. I took over responsibility for management of the group and responsibility for the development of our storylines. As well as playing at least ten different characters in the group ranging from an innocent virgin, bloodthirsty assassin and even a male lover. The success of the role-play spurred me on to writing novels.

I have a love of travelling and like to bring this to my stories to give them the air of reality. Surrendered Control, my first book released in November 2016, combines two of my favourite travel destinations. India is where I lived for eighteen months with my husband and two children. My young son was only six months old when we travelled there. It was a fabulous time for us all and they learnt so much about the differing cultures, as well as, much to my husband’s chagrin, spending lots of money in the silk shops. The Control series will feature lots of international travel.

I have always been an avid reader. Mainly murder mystery in the past but with Beautiful Bastard I discovered a whole new set of novels and I haven’t looked back since. I like my hero’s hot and hunky with a dirty mouth. My heroines demur but with spunk. And my books in a kick arse series.