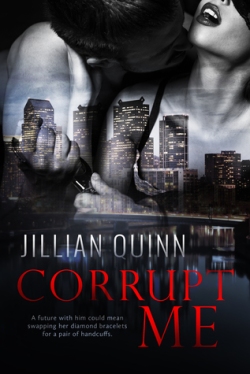 Izzie Rinaldi has everything going for her. All she has to do is make it through her senior year of college, and then she’ll be off to law school, one step closer to assuming her position at the head of her family’s empire. After a chance encounter with the campus bad boy, Izzie can’t get him out of her head.

Luca Marchese, the smooth-talking son of the most notorious man in Philadelphia, is used to getting what he wants. He hasn’t forgotten the girl he knew as a child, and now that he has Izzie’s attention, Luca will stop at nothing to have her.

Luca’s defiance of the law turns Izzie on more than she cares to admit. She wants Luca to corrupt her in every way possible, despite his reputation as the king of one-night stands. Their attraction is undeniable, but their desire for one another isn’t enough for Izzie to overlook visits from federal agents and the potential ruin of her family.

Linked to Luca and a criminal underworld, Izzie discovers she’s more like him than she thought. But a future with Luca could mean swapping her diamond bracelets for a pair of handcuffs.

*Corrupt Me is a standalone novel that is the first book in the Philly Corruption series.

There are enough machinations throughout this story to make my head spin.  And not always in a good way.

The author has crafted a story here where the expected trope stereotypes are somewhat twisted. And  what that gives the reader is a lead female who is strong, but not entirely likeable.

Additionally, elements of Luca’s behaviour are just completely self serving, and I struggled to connect to what draws these two characters together.

But despite these issues, the plot line is undeniably strong, and well mapped out, even if these characters didn’t resonate with me.

Ultimate, it didn’t send me giddy.  However, that’s not to say that won’t be the case for others.

Jillian loves Mafia men, sports, bad boys, dirty talkers, strong female characters, and books with plenty of heat, all of which you will find in her books. As a lover of all things bookish, she has a serious book hoarding problem and runs a book blog in her free time. When she’s not reading, writing, or blogging, she’s obsessively fangirling over hockey players and can be found wherever she can catch the next hockey game.