Review – Bound by Faerie by W B McKay @faithmckay @RobertMcKay 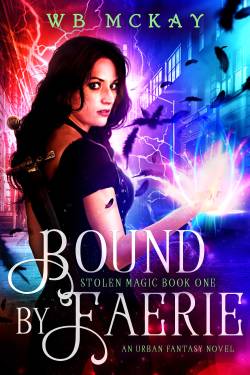 Sophie Morrigan inherited many magical gifts from her death goddess mother. Most of them inflict torture, except the most beautiful. That one kills.

As an agent for the Faerie Affairs Bureau, Sophie loves retrieving dangerous magical objects. The job lets her indulge her covetous nature, and most importantly, it pays the bills. But when a routine job goes south, she finds herself struggling to keep her deadly magic in check while fleeing the wrath of an enraged dragon.

In a desperate search for answers, Sophie stumbles across Owen, a fae nightclub owner who’s as sexy as he is irritating, but just happens to hold the key to her problems.

Sophie wants nothing more than to get her magic under control and return to her normal life, but first she’ll have to face off with all the dangers Faerie can throw at her. Can she fight her way back home? Or will both she and Owen fall prey to a crazed death cult?

The synopsis snagged me, and I eagerly agreed to review this story.  To be completely honest, I thought that it took a while to get going, and I felt a bit like I was just going though the motions for the first few chapters.

Fortunately, it did hit its stride and became a fast paced, enjoyable read.  I particularly liked how the issue with the “dangerous magical object” was dealt with – which, for those who are interested, was in the same manner that the said object itself behaved.  I’m not going to explain further, to avoid spoilers – you’ll know what I mean when you read it for yourself.

The characters were well rounded and believable, and their interactions full of realism and sparks of humour.

Overall, an enticing start to the series.

WB McKay is the pen name of married authors Robert and Faith McKay. Their love of stories brought them together, and they’ve been writing by each other’s side ever since. WB McKay marks the beginning of their true collaboration. They sat down and asked themselves what they couldn’t get enough of. The answer was simple. They loved urban fantasy set in a massive universe with room for every creature they could imagine. Throw in a gutsy female lead, a dash of humor, a pinch of romance, and they would eat it up and ask for thirds.

With that recipe in mind, they created a universe based around the vibrant and enchantingly dark lives of the fae. They invite you to explore their world in Bound by Faerie, the first of their magical adventures.