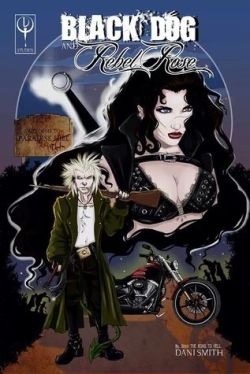 Park your steel horse, grab a beer, and delve into a special preview issue of the BLACK DOG AND REBEL ROSE SERIES by international bestselling comics creator Dani Smith.

Although this is a reasonably short book (159 kindle pages), I didn’t get into it as quickly as I expected to.  Once I was able to put myself in the story, it was an easy enough read, but I felt that the story really struggled due to a lack of character development.  This, in turn, led to a lack of connection between the characters and the story and me as a reader.

That, coupled with a lack of a real sense of threat meant that, for me at least, this was more of a surface read than an immersive reading experience.

DANI SMITH is a comics artist/creator/illustrator, gritty “outside the mainstream” storyteller, and character/concept artist hailing from California. In her career thus far she has studied everything from costuming to tattooing, and she is always on the hunt for the next great artistic adventure. She is the creator of the paranormal adventure series BLACK DOG AND REBEL ROSE, which is currently being produced as a feature film.